From Margate With Love…and Shells

Something else I want to do is go to Margate to stay at The Reading Rooms and visit The Shell Grotto. For most people, Margate died some time in the 60s, but it is about to make a major come back. Even if it’s only with me.

Think this is what i’ll be demanding for my birthday from Boyfriend this year, although i’ll probably have to wait for The Reading Rooms’ off-peak season because man-oh-man is it ‘spensive for a B&B!

There are lots of lovely things to do in Margate. Old arcade, fish and chips, beautiful beaches, great views…and RG Scott’s Furniture Mart – the kind of junk shop that makes my heart race. I sort of don’t want to tell you about it so you don’t go and take all the good stuff before I can get there, but take my word for it: amazing.

The Shell Grotto is something that not many people know about. In my opinion it’s something on a par with Tutankamun’s tomb…but weirder.

If you don’t know the story, here’s how it goes:

One day, a rather portly gentleman started to dig a duck pond. After a while he came upon a deep shaft running right down through the hill. Peering down he thought “ere, that looks dead interestin’, think I’ll have a closer look’. However, being on the large side, he decided he wouldn’t chance it himself. So he called his son along, and by and by, lowered him down the shaft. And by golly what he found down there! The shaft came out into a group of short tunnels and small chambers. The walls were entirely covered in shells, forming strange patterns and shapes. Neither man had ever heard tell of any such thing in the area, and no one else in the village had either. Which meant it had to be older than official records and even local folklore. After a time the Grotto became something of a tourist attraction, and gas lamps were installed to light the chambers. Nearly 200 years later, and the shells are sadly coated with black grime from the lamps, but I think it just makes for a more mysterious atmosphere… 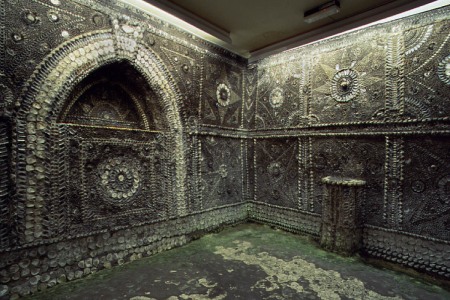 Imagine finding THAT whilst doing a spot of Sunday afternoon DIY!

You are currently reading From Margate With Love…and Shells at Arch Copy.