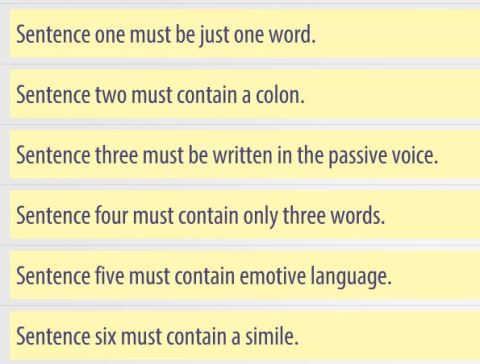 I spent my evening playing with Slow Writing, which I think is intended to be a tool for teachers to get kids writing creatively. It is now my daily set of push-ups, imaginatively speaking.

Slow Writing gives you six instructions for six sentences, which you can reveal all at once, or explore as your story develops. I like the slow creep of discovering where this is going to go – the maddest things happen.

Being constrained is actually heaven for me. I’m used to writing copy to a pixel-strict brief so I find this complete control to be a potent nemesis to writer’s block. Anything to change stuff up a bit and jump out at your own mind.

Here’s an example from tonight:

BANG.
And then: BANG.
The door was slammed by something with a clear grudge against the grain.
A big grudge.
Slowly, so slowly that they thought their hearts would escape their chests, the handle inched downwards and the door crept open.
A child stood there, shivering like an old dog left out in the rain.

And lo, there he was.
Standing stock still as though fixed to the spot with a strong glue.
His eyes dripped salt water, or was it just a surplus of that mossy-scented rain about the place?
No.
It was more than that: he was as afraid as a child can possibly be, knowing little of the world beyond what he feels in the pit of his empty little stomach.

The boy poked his head forward, sniffing at the sodden air with a nose that wrinkled at what it found.
Stop, they urged silently, Oh please stop before it’s too late.
Step, step – and another step.
Stop.
Shakily, he lifted a hand up to his face and wiped the damp sadness away with mottled fingers.
And with one long, low and lingering gasp, he began to speak.

Like someone who had been locked away from others for a good while, the child had a peculiar way of setting out his words.
His mind told a story: his mouth dropped pebbles of heavy sound.
But stone by stone, the pebbles were polished up on the listeners’ sleeves and they began to build the story in their own minds too.
He had been hungry, they had been hungry; he had been cold, they had been cold; he had cried out to the night to take him away, they had begged to that very darkness.

What spake he?
Oh, nothing of consequence.

You are currently reading Slow Writing at Arch Copy.