One of the most perfect vintage pieces I’ve ever had the fortune of stumbling upon is a red 1960s crimplene skater dress with a flowery bib and matching pleated pocket. 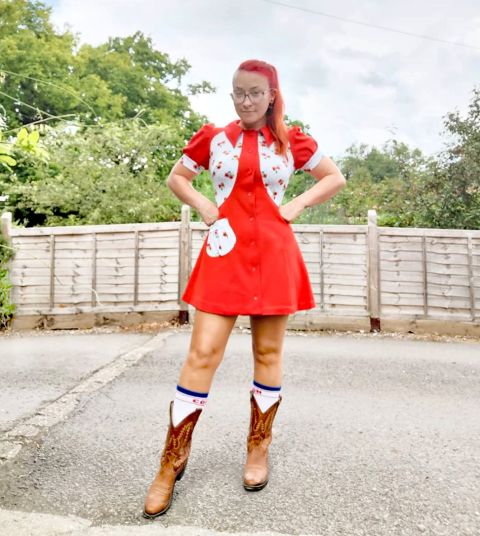 I was inspired to wear such a jewel of the 60s today because my new rollerskates are due to arrive soon. Major American Graffiti vibes with that combo.

Although rollerskates have existed for nearly 300 years and been a cyclical craze for the last hundred, the 60s and 70s are when quad skating got good. Not only were rollerskates completely redesigned using modern materials (hello, urethane wheels); skating also became an interesting part of the civil rights movement.

Until the late 1960s, rollerskating rinks were segregated like most recreational areas. In 1962, a group of high school students in Illinois staged sit-ins at a local pool and rollerskating rink. The protest resulted in many arrests and 17 kids began a hunger strike.

One year later, a man named Ledger Smith rollerskated to join Martin Luther King’s March on Washington. It was a 685-mile journey and he completed it in 10 days, wearing a placard saying “I’m skating to Washington for Civil Rights” the whole way. Many people cheered him on – but one tried to run him over.

Due to the civil rights movement, most recreational centres were desegregated by the end of the 60s. Rollerskating became a point of pride as Black people were finally able to legally enjoy their communities.

Of course, even now, Black people can be in danger just by daring to exist. I can imagine that any public pleasure or display of skill could feel like a revolutionary act, in a system that still kills Black men and women as they sleep, drive, try to breathe.

The power of rollergirls in 2020

Instagram knows me better than my therapist, so as I looked at skates, I began seeing more and more rollergirl videos. Quad skating in 2020 is very female and beautifully diverse. The joy and power I see in these women as they skim like birds over pavement and tarmac…it thrills me. I want that. 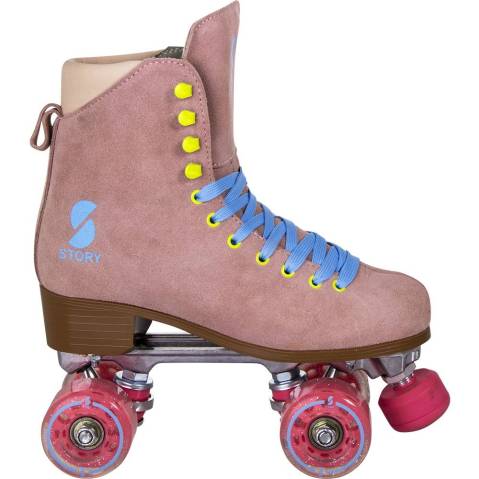 So, I now have some Story Duchess side-by-side skates – a bit of an upgrade from my previous kiddie skates. I have a destination in mind for practising. I have a helmet, and pink and mint knee pads. I’m determined that I will get good at this. I skated a lot as a kid and I’ve always danced. All that’s missing is practice and confidence. The confidence comes from the protective wear, I think, at my advanced age.

Something else that excited me about the 2020 quad skating scene is the style, man. It’s like 70s rock ‘n roll meets 80s athleisure meets 90s girl group. Of course, it has to be comfortable and durable. It’s got to roll with the crunches and stretch with the body. But the less you fall, the less you wear – until you’re at skate-yoga-instructor levels of booty-shorted glory, like Coco:

Freedom comes in infinite forms through countless ways, twisting time unapologetically while never speaking a word. – How does something so big, hide so well that people live a lifetime trying time find it? – In a world that constantly pushes their ideas of freedom on you, I hope some of my freedom helps you find your own💫 -Coco xx . . Want my skate playlist? Join the tribe on my patreon page! – How to skate/yoga Tutorials (link in bio and classes are sent via email after payment). – In person Skate Yoga classes Check details below 💫 – Skate + Yoga Options 🌙 – VEGAS⁠ Date June 19+20+21⁠ SEATTLE ⁠June 26+27+28⁠ CALIFORNIA WORKSHOPS ⁠ ⁠SF|Oakland⁠ July 10th 11th 12th⁠ – Please comment BELOW “interested” with The City you wanna attend and I DM ya with alllllll the details!⁠ . #moxiskatedaily #rollerskating #impalarollerskates #blm #blacklivesmatter #rollerskates #skating #rollerskater #rollergirl #skatergirl #moxirollerskates ⁠ #adultsskatetoo #wanderlust #wildandfree #gypsysoul

Yoga has been part of the skating world since the 70s, when Denis Schufeldt pioneered its use in training for downhill skateboard racing. The balance and form achieved through yoga allowed him to hold exact poses to maintain control of a skateboard hurtling downhill at 50mph. Now, Coco is combining street skating with a ballet-like flow and I’m addicted to it.

I’ve changed during lockdown. I row for 45 minutes every day and run every other day. I speak to incredible, supportive women throughout my week and get so much power from them. Having more time means I’m eating better, I’m spending more time being creative and I’m reassessing what I want my life to look like.

Why shouldn’t I take up skating in my thirties? I can do whatever I want.

You are currently reading Rollergirl at Arch Copy.